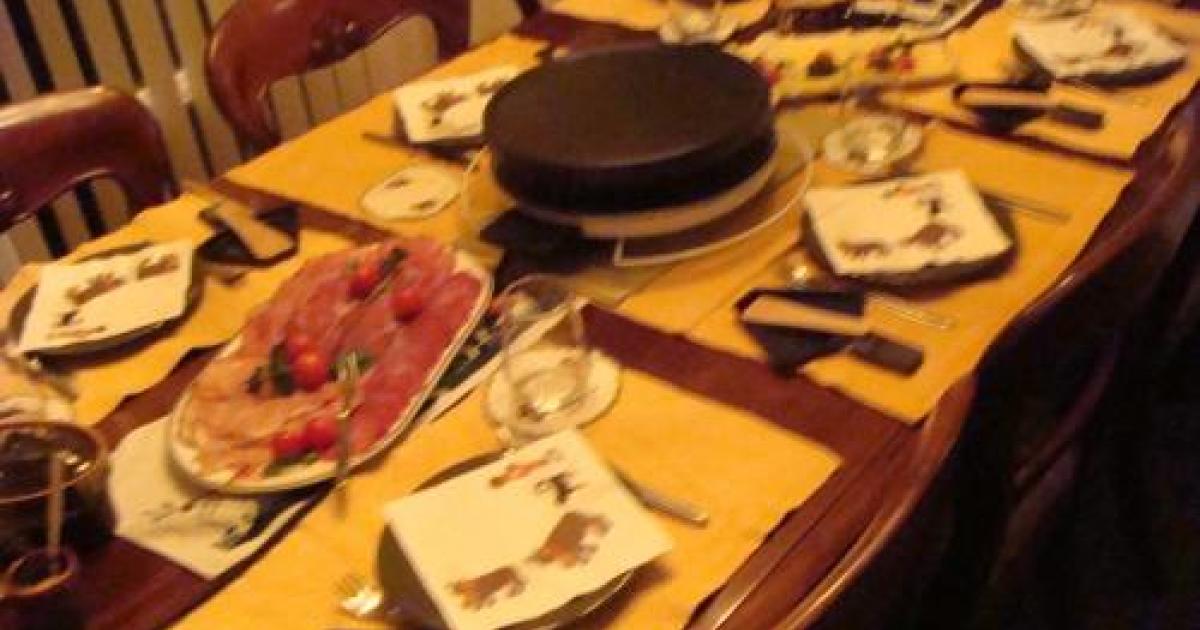 Having recently learned a few culinary terms for Italian, Spanish and Indian dishes, I was delighted to be invited by my friends, Linda  and Brian,  to a Swiss night for racelette and fondue. Their plan was to ply us with food and wine and then have a quiz about all things Swiss. This is an occasion where my "just in time" approach to life let me down.  I forgot my firm resolve, formed when Linda invited me, to cram a Wikipedia post full of Swiss trivia into my brain so I could stun my friends with  my encyclopedic knowledge. In fact, until the moment Linda announced the contest I had forgotten there was to be one. So there I was, totally unprimed with facts, other than its location in Europe, the appearance of the Swiss flag, and the fact that I had actually spent two days in Zurich more than thirty years ago.

But first, the food. The dining area was divided into two locations, 6 people at each table. I got the raucous bunch, although after my wine glass somehow remained full no matter how hard I tried to empy it, I guess I was pretty raucous too. The picture shows the table set up for raclette ( which derives from racler, to scrape). We put slices of cheeese into little paddles and stuck them in the machine (centre of the  table) to melt. Then we scraped it out onto small boiled potatoes and ate it with prosciutto, picked onions, tomatoes and gherkins.

When we were suitably relaxed  and vulnerable, Linda sprung the contest on us. Most of us got the official languages, colour of the flag, number of cantons, but who knew the French equivalent of the "Italian Stallion?"  Fortunately I was quite mellow by then and my naturally competitive instincts were suppressed, so second place for our team of two was just fine by me, specially since I think my team mate, Kendra, counted as many points for wrong answers as we got for right .

We changed places and our group moved to the fondue table. By that time my camera was not taking very focused pictures for some reason so I dont have a picture.  I was really impressed by the cheese mixture (pot rubbed with garlic then the cheese melted slowly with  kirsch and  white wine). I will definitely need to get Linda to coach me on the preparation.

I have never again dared to try to make cheese fondue since an absolutely disastrous evening years ago when, as a fairly newly wed couple,  we had invited friends over for cheese fondue. Fondue was all the rage in Cape Town in the late sixties - people were getting three or four fondue burners for wedding presents!  Anyway I had often made fondue with meat or fish - I guess the Japanese equivalent is shabu-shabu - but had never tried cheese fondue.  Initially the evening was rather disastrous - I had not got the temperature right and the first batch burned  while the second attempt curdled. In the end we lounged around the fire, eating chunks of delicious bread with butter and drinking copious amounts of wine. The evening was thus rescued by the wine but I have since regarded cheese fondue entertaining as a high risk activity.  So hooray for Linda.

As I left the party, the night air was cool and the rain had subsided to a slight drizzle. I walked around the corner to the entrance of my building, tummy satisfied by the  food and wine, heart happy with the good company, and  grateful that I did not have to drive home.