For our pre-show dinner before seeing Beyond Eden at the Playhouse, we decided to visit Chambar Restaurant. I knew that it had been some time since I had last eaten there but was not sure how long. As we were led to our table in a section of the restaurant that had been added since my last vist - our server told me that it had been added more than a year and a half  ago. I hadn't realized it had been so long but I guess time flies faster and faster as we mature!

Anyway, with a Canucks game starting at 7 at GM Place and the Playhouse production starting at 8, the place was humming and every table was full.  The server took our orders promptly.   We expected that it might take a while for our order to arrive but were in no hurry and were happy to relax and chat over a glass of wine. But as the time went by and no food appeared we began to wonder about the absence of a bread basket so we asked our server.
We hadn't noticed but bread was considered a "side " and had to be ordered separately for $3.00.

Which raises an interesting question. Is it "chintzy" for a fine dining restaurant not to  bring a bread selection  to the table? Or is it a smart move that prevents waste ? I  know that on occasion I will decline a bread basket when I am feeling "low carb virtuous", but I do like to be given the option. and specially when it takes a while for the food to come, it is smart to have some bread to counteract the effect of wine on an empty stomach.  I would be interested in hearing back from other diners.

When our entrees arrived they were worth waiting for.  My friend had the cassis & juniper venison loin, stilton croquettes, braised belgium endive, coronation grape & aged sherry sauce while I had the spice rubbed duck breast, butternut squash puree, red delicious caramelized apples, whipped goats cheese & tamarind gastrique. Both were cooked to the perfect state of medium rare that we had ordered and were delicious.

From the restaurant it was a chilly but short walk back to the Playhouse to see a terrific new Canadian play. 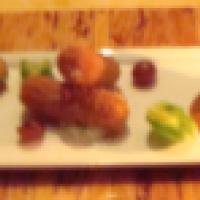 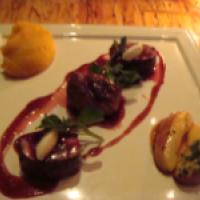