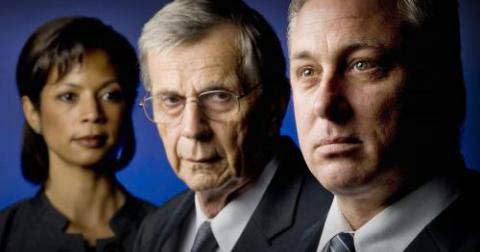 Vancouver, BC: I eagerly anticipated that  British playwright, David Hare's "Stuff Happens", about  the road to the  Iraq war,  would be a fascinating and provocative  play. Unfortunately for me it wasn't. During the time that I used to write "Rants, Raves and Reviews" it was not often that I felt compelled to rant. This time I do. Despite some interesting performances I found this play  annoying, superficial and far too long.  It runs three hours and even in the first act  I was wishing that my watch had a luminous dial.  But I will point out that at least after the first 90 minutes as I walked out to the foyer mumbling irritably to myself, several of my friends were quite animated in their enthusiasm for what they had seen so far.

CHICAGO, IL. Although The Second City has clubs in other major cities including Toronto (the second oldest venue, running since 1973), Chicago was where it all started in the early 1950s. The list of notable alumni of the Chicago Second City troupe is a who's who of comedy, theatre and film so how could I leave Chicago without catching the newest show at the Second City Mainstage Theatre?