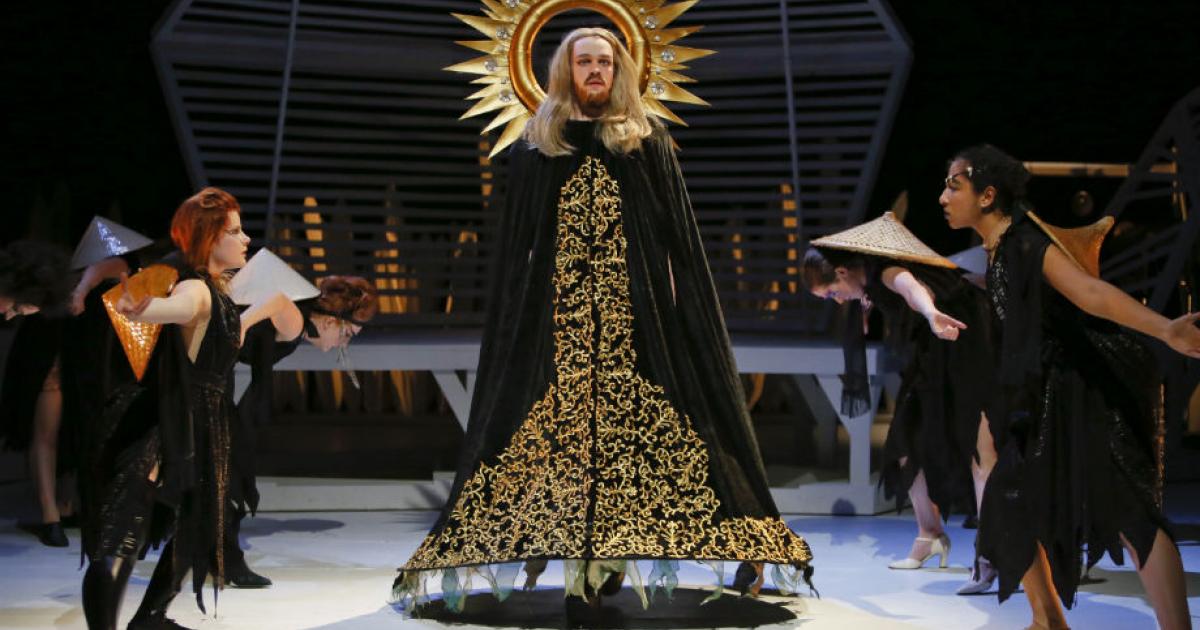 Vancouver, BC:  I saw The Bacchae 2.1 on the closing night of the show, and this production is one I will remember as much for its striking visual effects as for the awesome performances. The costume designs by Kiara Lawson were stunning as the examples in the photos show.  Great animal mask too.

The movements of the ensemble of black clad women, and the individual performers especially Dionysus (Thomas Elms) were captivating with many successive tableaux-like moments that my mind  captured as would a camera. The set by Natalia Ruiz was also an intriguing design, though I felt that there were too many times when the set pieces were moved around the stage for no apparent reason, and this was a distraction. The lighting and video projections by Eric Chad were well done. For example the abstract patterns on the floor while the piano was played were a visual reflection of the music.

Overall this student cast were excellent. Elms was mesmerizing as Dionysus, observing the storm of human foibles with the calmness of god-like superiority, comfortable as the sexually ambiguous Dionysus, and wily in his ability to entice Pentheus into his net. Matt Kennedy who played Pentheus, had a difficult role. While he did an outstanding job of manifesting the contrast between the orderly, autocratic ruler and the female side of the cross-dressed Pentheus, both Pentheus and and his aides (Francis Dowlatabadi and Javier Sotres) were burdened with long tracts of list-like dialogue and tended to shout most of their lines.  I thought they could perhaps have found more nuances; passion and power does not necessarily equate only with loudness. Helena Fisher-Welsh was both powerful as fierce Agave and overtly tragic in her realization of what she had  done. I also admired Ghazal Azarbad's Orange Women, Nathan Cottell and his guitar as Kadmos, and Allyce Kranabetter as Tiresias.

While I enjoyed the spectacle and the performance I was less enamoured of the text. Euripides' The Bacchae tells the story of Pentheus, King of Thebes and his mother, Agave, who with the other women of Thebes, has become a follower of the Dionysiac cult. Pentheus is concerned that in the hills above the city, these women performing wild rituals of worship, singing and dancing, are defying the rational civilized order which he imposes on the city. To discover what is really happening, Pentheus follows Dionysus' suggestion to disguise himself as a woman and go up the mountain to spy on the reveling Bacchae. When Agave and the women discover that he is a man disguised as a women, they kill him.  Too late she realizes that, under the influence of Dionysus, she has killed her own son.

There are obviously many ways of adapting and re-making the classics. For example in Christian Barry's and Hawksley Workman's one-man rock opera version of The Bacchae, The God that Comes, that played at The Cultch in 2013, actor Hawksley Workman plays all the characters including the chorus.  The Bacchae 2.1 playwright, Charles Mee, is noted for his collage approach to (re)making theatre in which he freely incorporates or as he describes it, "pillages" passages or elements from other sources into the text. In this adaptation of The Bacchae, some of the "pillaged" material resulted in the shouted laundry-list type of dialogue that I mentioned above. Intended to evoke the sense of inter-gender rage reflecting the struggle between the men and women of Thebes, perhaps?

Overall I thought this was an well-directed production.  I think many of the images will stay with me for a long time. 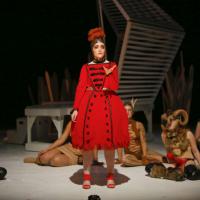 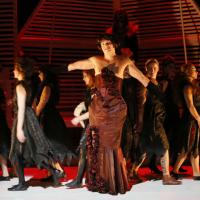 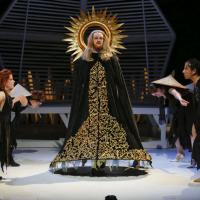